I am presently reading the autobiography of respected Hollywood actor, Sidney Poitier – The Measure of a Man. In the book, Poitier traces his childhood days, in the country of The Bahamas, an archipelagic republic near Cuba and is now famous internationally, as a tourist destination. Bahamas means shallow sea or shallow water. Its capital is Nassau, also known as  Charles Town, about two centuries ago… On his 72nd year, Sidney Poitier took a look at the life he struggled with, fought for and lived wisely and well/ en.wikipedia.org

Poitier is, of course, a black man. He is one of the senior actors and a respected director in Hollywood and, one of the public figures in America revered by the host, Oprah Winfrey (The other senior, black  figure she adores is none other than the poet, Maya Angelou). Poitier is  a French surname, a common one, in Cat Island, where Sidney’s family originally hailed and lived. The Bahamas was conquered several times – by the Spaniards, the French and the English. It was the Latin American country that was the major source of people – by the Spaniards for the  European slave trade – a couple of centuries back… Being near the U.S., The Bahamas has also been a favorite destination of Americans, since the 18th century.

In 1927, when Poitier was born, The Bahamas was still being governed directly by the English folks. About one hundred years prior, the process of “emancipation” of the former black slaves in the group of islands has already begun. But Poitier’s childhood was already free from the tension between the Americans – who wanted the slaves freed – and, the English and other European colonial masters – who wanted the black people “retained” or held as indentured members. There were only two white persons in his native Cat Island, Sidney recollects in the book. He did not know racial discrimination – until his family moved to the capital, Nassau, when he was eleven.

Shallow waters and relaxing ambiance in The Bahamas/ columbusmmug.com

Reading Poitier’s book, I have been both surprised and gladdened by the similarities between The Bahamas and the Philippines. The former is composed of 700 islands, while the latter, of 7,107 islands. The Bahamian people have been ruled by the foreigners, three times. So, were we, the Filipinos – by the Spaniards, by the Americans and for a brief, three years – by the Japanese. In The Measure of a Man, Poitier also talked  about the economics of his country, when he was but a child. According to him, the livelihood of his people then was a combination of barter trade and cash economy. Those times, people in the islands lived by planting, fishing, gathering and rendering services in exchange for products or other services. The same has characterized the Philippine economy for centuries, although cash economy has been making its way through the remote areas, in the last several decades.

The Bahamas of today is an eco-tourism center, way better and more modern than the country Poitier lived in, eventually left and, more than half a century later, described in his autobiographical work. In fact, The Bahamas now belongs to the roster of the world’s richest countries, it being the banking center in the Latin American region… Politically, the country has gone some way, as a Commonwealth currently governed by the Bahamian people, in the name of the English throne. From being a slave depot, to a colonial plantation and cash crop center, to its present status as a favored tourist destination – for the leisure-seeking, moneyed people of the world – this group of islands boasts of a prosperous economy and an invigorated people. On the other hand, the Philippines, has yet to gather its moves towards becoming an agri-tourism center in Asia (current government’s plan), sustaining its GDP, alleviating the lives of its citizens and improving their, our, chances in life. 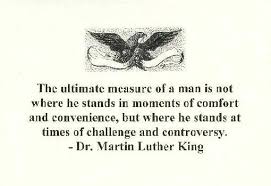 It maybe easy to measure. The hard part is measuring up/ http://www.picturesdepot.com

Poitier, of course, succeeded in life, rising to become one of Hollywood’s pillars, multi-awarded actor and one of the show business’s respected figures… I am, by the way, about one-fourth into the book. It has so far been an engaging foray into the life of a giant personality – wise, been-there, done-that but noticeably, unassuming person. In The Measure of a Man, Poitier speaks longingly, clearly and softly about the place and people that molded him to be the person that he is now. One who is seemingly gone far and away, but quite near and naturally at home – with himself and the world… I’ll let you know, people, when yours truly has finished reading the book.

If you want to see the true measure of a man, watch how he treats his inferiors, not his equals. – J.K. Rowling

The true measure of a man is how he treats someone who can do him absolutely no good. – Samuel Johnson

The true measure of a man is what he would do if he knew he would never be caught. – Thomas B. Macaulay

The measure of a man is the way he bears up under misfortune. – Plutarch

If there be any truer measure of a man than by what he does, it must be by what he gives. – Bishop Robert South

The measure of a man’s success must be according to his ability. The advancement he makes from the station he was born gives the degree of his success. – Sir Walter Besant

Success is not the measure of a man but a triumph over those who choose to hold him back. – Bill Clinton

If a man can bridge the gap between life and death, if he can live on after he’s dead, then maybe he was a great man.  – James Dean

The measure of a man is what he does with power. – Plato

Bear in mind that the measure of a man is the worth of the things that he cares about. If it is good to say or do something, then it is even better to be criticized for having said or done it. – Marcus Aurelius Antonius

You have been told that, even like a chain, you are as weak as your weakest link. This is but the half the truth. You are also as strong as your strongest link. – Kahlil Gibran

The morning light greets us at five a.m. these days and stays up until seven, folks. Tomorrow is the beginning of the long days of June, here at the tropics. It is the start of the rainy season – slippery roads, plenty of moss on the walls and the pavements and, for sure,  traffic bottlenecks,  whehehe… 😉 Cheers!

27 comments on “Many times conquered”